The Lexus UX is Outside of the Box

You could forgive me for being confused. After all, I was told I would be driving a crossover. Yet to put the all-new Lexus UX (which stands for urban crossover) into such a narrow box is unfair – especially when it looks and feels like much more than a traditional CUV. Instead, it is unabashedly aggressive about forging its own definition of utility by beautifully blending the style of a sports car with the usefulness of a SUV. You could say it's outside of the box.

It started the moment I picked up the UX 250h AWD F Sport at Lexus of Royal Oak.

“Right there. It’s the white one.” 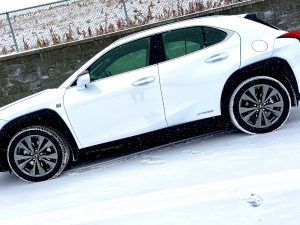 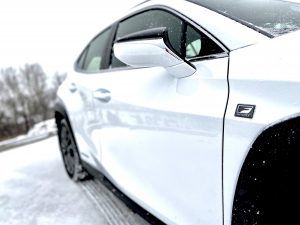 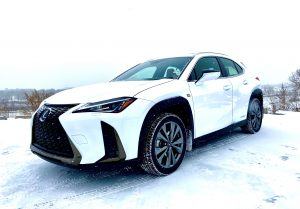 To say the UX is a show-stopper is an understatement. Sporting Lexus’ unmistakable spindle grille, it looks more like a sporty hatchback primed for a night out than a family vehicle heading to dance practice.

Perhaps that’s because the UX is also remarkably short, with a roof height of 1,520 millimeters. That’s midway between a Toyota Corolla (1,435 mm) and Chevrolet Trax subcompact CUV (1,646 mm). Some might argue the UX’s lower ride height negates the benefits of buying a crossover or sport ute. I far prefer its more manageable size and athletic posture.

Inside, the F Sport package removes all doubt that the UX is just another CUV. The Circuit Red leather heated sport seats are stunning, complemented by a two-setting heated steering wheel. Bonus points goes to Lexus for adding an auto setting that adjusts those heat settings according to the ambient temperature outside (perfect for the bitterly cold days I had the UX, but more on that later).

My all-time favourite feature, however, is the grouping of controls just south of the Remote Touch control pad. By its own right, it's light years ahead from previous versions thanks to the addition of both physical feedback and audible alerts once you drag your finger over icons displayed on the 10.25-inch infotainment display. These controls are perfectly placed wrist-level at the base of the middle console. They allow you to seamlessly switch stations, adjust volume or toggle between sources. It’s so intuitive that I’m a pro before I leave Lexus of Royal Oak’s parking lot. 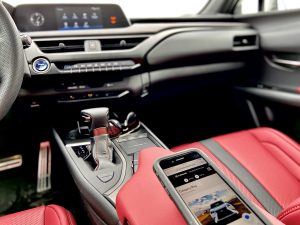 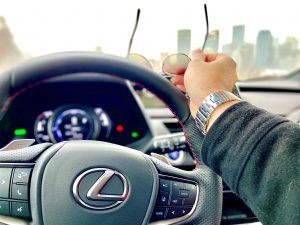 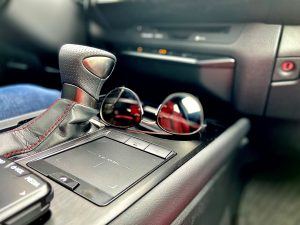 As for space, that’s where you’ll need to compromise. The UX is built as a five-seater, but more comfortably accommodates four. And with just 484.2 litres of carbo volume to accommodate the 250h’s hybrid components, you won’t be taking a trip to IKEA anytime soon. But a weekly trip to any Calgary grocery store is still comfortably within reach.

The UX is more than just show, though. It’s also a thoroughbred in our harshest of winters. And the weather so happened to descend on Calgary during Day 2 of my drive. Snow, wind and plunging temperatures added some obstacles. The size of snowdrifts alongside the slickness of a skating rink to my 60-kilometre roundtrip journey to work among them. 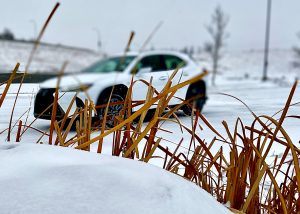 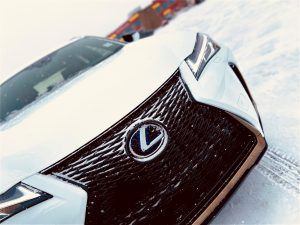 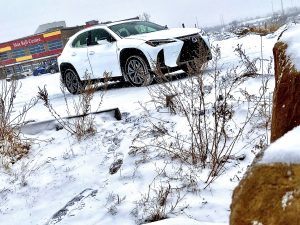 Yet the 250h AWD provided a stickiness to Calgary’s roads. I always felt in control, despite wind-swept streets that could have made me feel otherwise. The mid-range power (which is surprisingly peppy) never swayed me out of my lane, nor was I ever distracted when the UX switched from four-cylinder action to silent, pure electric.

Even on Day 3, as the snow continued, I had no additional challenges in my Max Bell-to-Crowfoot rush hour drive to meet up with former co-workers. In fact, the additional 30 minutes of ride time on Calgary’s busy roads was borderline enjoyable as I sunk into my plush leather seats and grooved to some 90s on 9!

In the rarest of cases, the UX is a vehicle where you can judge a book by its cover. Delightful to look at and exciting to drive, it shakes up the crossover segment with a much-needed vibrancy that many drivers will want.

Experience the Lexus UX 250 first-hand at Lexus of Royal Oak, located in the Northwest Auto Mall just off Stoney Trail on 112th Avenue N.W. Payments are available for as low as $275 biweekly. Check out available dealership inventory online or call 403-296-9600 to get started today!